“…thank you so much for being part of our day on Sunday. You looked and sounded absolutely fantastic and everybody commented on how beautiful the music was.” – Jane & Trevor 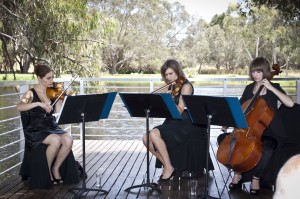 Dolce Ensembles was contacted by the lovely couple Jane and Trevor late last year to provide a string trio for their engagement celebration at the Mallard Duck in the Swan Valley.  We were told that although there was to be an afternoon of celebrating the couple’s engagement with close family and friends, they had also planned a surprise ceremony to be held that afternoon!

The Mallard Duck is such a beautiful location with the restaurant looking out over a small lake surrounded by Australian bush – not to mention many ducks!  Lower down on the property, right next to the lake and under the stunning gum trees, tables were set up for lunch and of course, the big surprise! It was such an intimate setting and our string trio was placed in the perfect location for all of the guests to enjoy the music. 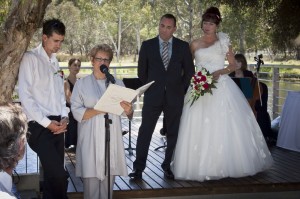 Shortly after entrees were served, the couple announced that they would be joined in marriage that very afternoon – tears of joy, happiness and excitement were shared with all of the guests and the excited couple.  Jane disappeared for a few minutes and her arrival in a gorgeous wedding gown was announced as Trevor played a CD of one of her favourite songs.   As the newlyweds signed the register, we chose to play Elton John’s Your Song, as it was referred to in the ceremony and as a part of the couple’s requests list, it was perfect! Following the ceremony and during the serving of main course and dessert, the trio continued to play a selection of contemporary songs, including Have I Told You Lately by Van Morrison, Moon River by Henry Mancini and Andrew Lloyd Webber’s Music of the Night.

We would love to congratulate the wonderful couple and send a big thank you for including us in your exciting afternoon – it was such a touching ceremony, thank you to all who were involved x